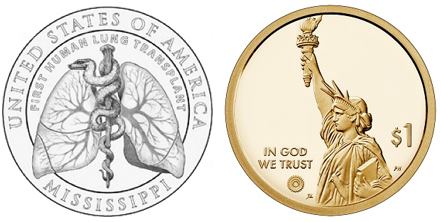 The CFA argues that the design of Mississippi’s reversal demonstrates the state’s historical importance as the site of the first human lung transplant. Accordingly, the Rod of Asclepius image appears beneath a stylized representation of human lungs.

Though a standard and well-accepted treatment for certain patients with terminal respiratory diseases, it took decades of experimental studies and clinical trials to succeed.

Early outcomes for cancer patients have improved significantly over the past three decades. In addition, longer-term survival rates following lung transplantation will improve over time due to better treatment and prevention of chronic lung allograft dysfunction.

Lung transplantation is a viable option for patients with advanced respiratory diseases. Still, the success of this procedure was the result of decades of clinical trials and experiments. While occurring alongside other solid organ transplants, human lung transplantation took far longer to become a routine procedure due to delays with technical issues related to the healing of the bronchial anastomosis – the high immunogenicity of the lungs with a need for immunosuppression and the significant risk of pulmonary infection.

Hardy and Webb researched lung transplantation for seven years on hundreds of animals at the University of Mississippi, Jackson, before obtaining permission to perform the procedure on a human. Such consent included the following caveats: the patient must suffer from a potentially fatal disease; the transplantation should have a reasonable prospect of success; no significant part of the patient’s lung should be lost during the process, and a left lung transplant should be performed because it was easier.

On the 15th of April, 1963, the University of Mississippi Medical Center admitted a 58-year-old man with left lung bronchial carcinoma. He suffered from dyspnea at rest due to advanced emphysema despite having chronic glomerulonephritis. Additionally, a neoplastic tumor blocked the left main bronchus causing obstructive pneumonia. Given the proximal location of cancer, pneumonectomy was indicated. Unfortunately, the respiratory failure prevented a curative left pneumonectomy, so a lung transplant was necessary.

At approximately 7:30 pm on the 11th of June, 1963, an emergency room patient with a massive myocardial infarction entered the same hospital. Following the failure of all resuscitative measures, the family agreed to donate the left lung for transplant. In the beginning, donors who received lung transplants did not beat their hearts. James D. Hardy and his team successfully performed the left lung transplant.

Approximately 18 days after surgery, the transplanted lung was functioning normally. At the time, the immunosuppressive agents were azathioprine and prednisone, with mediastinal irradiation. Unfortunately, after 18 days, the patient succumbed to infection and kidney failure. After conducting an autopsy and ventilating the lung, no signs of rejection were observed. The anastomosis between the vessels was intact, but a small hole on the membrane side. Inflammation sealed the injury.

The Mississippi Innovation Dollar reverse portrays the lungs of a human and a rod depicting Asclepius, the Greek god of medicine. A single serpent surrounds the Asclepius Rod. In addition, the coin’s reverse shows the United States of America, First Human Lung Transplant, and Mississippi.