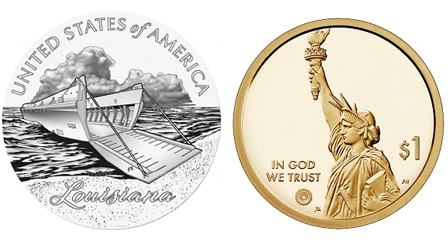 The Louisiana dollar design was carried out in the same style as the Higgins landing craft, which turned the tide of World War II.

Higgins Industries founder Andrew Higgins is mentioned throughout the United States Mint’s design narrative. He originally built his ‘Eureka’ boat to explore Louisiana’s swamps and marshes, allowing him to navigate shallow waters easily. Later, the landing craft was modified to comply with military specifications and converted into a ship.

Utilizing a ramp on the front of LCVP (Landing Craft Vehicle and Personnel) boats during World War II, U.S. Navy and Marine Corps soldiers, equipment, and vehicles could unload directly onto the beaches. Because the Higgins Boat could maneuver in just 10 inches of water, it provided more attacking points, contributing significantly to the success of the Normandy landings. Additionally, plywood was used in conventional construction methods, reducing steel usage. A total of 23,358 LCVP were built during the war.

“Andrew Higgins is the man who won the war for us,” said Dwight D. Eisenhower during a 1964 interview.

The President continued: “If Higgins had not designed and built those LCVPs (Landing Craft, Vehicle and Personnel), we never could have landed over an open beach. The whole strategy of the war would have been different.”

Colonel Joseph H. Alexander noted, “The Higgins boats broke the gridlock on the ship-to-shore movement. It is impossible to overstate the tactical advantages this craft gave U.S. amphibious commanders in World War II.”

His half-wooden, half-steel “small boat” played an essential role in the war.

Originally a builder of wood boats for oil exploration in Louisiana, Andrew Higgins was an Irishman with a penchant for whiskey and a fiery temper. Immediately after the end of the First World War, he anticipated that the U.S. Navy would require thousands of small boats but had a limited steel supply, so he bought mahogany from the Philippines in 1939 – an eccentric moment in Higgins’ life.

With WWII advancing, he applied for a position in Naval Design. However, he claimed the Navy didn’t know anything about small boats, and he struggled for years to convince them of the need for small wooden boats. Eventually, the LCVP contract was signed.

There were more than 30,000 people employed at the Higgins New Orleans location. In an unusual move for the time, Higgins used black people and women, and it was during this period when the Navy mass-produced Higgins boats. With a length of 36’3″ and width of 10’10”, when unloaded, the boats were capable of 9 knots and had a displacement of 18,000 pounds. The vehicles could carry 36 combat-equipped foot soldiers or 8,000 pounds of cargo and were armed with two .30 caliber machine guns. The anatomy of the Higgins boat can be found in the image below. Higgins helped other American factories produce 23,398 LCVPs during the war.

During the Normandy invasion, the Higgins boat landed troops from the 1st Infantry Division directly onto Omaha Beach, Germany’s main line of defense.

The reverse of the 2023 Louisiana Innovation dollar shows a Higgins Boat parked in the surf on a sandy beach in Normandy. In the boat’s background, ominous storm clouds gather. The United States of America and Louisiana are also present in the design.