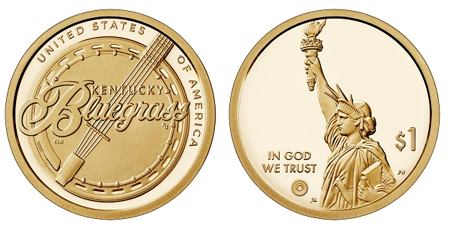 In recognition of the invention of Kentucky Bluegrass Music, Kentucky’s dollar coin is now honored on the American Innovation Dollar. The roots of bluegrass can be traced back to English, Scottish, and Irish ballads and dance tunes and blues and jazz. The name “bluegrass” was given to the genre by Bill Monroe and the Blue Grass Boys.

Often considered the originator of the genre, Bill Monroe was born in Rosine, Kentucky. In the early 1900s, he grew up working on the family farm (Jerusalem Ridge) and playing music with his siblings. As a young boy, he enjoyed listening to his mother sing and play the fiddle; he was also influenced by his uncle Pen Vandiver’s fiddling and the guitar-playing and fiddling of Arnold Shultz, a famous black musician who played around Rosine.

Bill and Charlie moved to Chicago for work after they became adults. Eventually, the Monroe Brothers formed their band. In the 1930s, the group was a prevalent act. In addition to playing guitar and mandolin, Charlie and Bill sang together. After splitting up in 1938, both brothers formed their bands. Eventually, Bill’s band came to be called “Bill Monroe and the Blue Grass Boys.” Over time, country music arose from the music of Monroe and the Blue Grass Boys.

Bill and his band debuted at the Grand Old Opry in 1939 as one of the first acts to perform at the venue. They soon became one of Nashville’s most popular touring acts. The harmony of Bill’s band set it apart from other traditional country bands since it used a powerful sound driven by acoustic instruments. Bill’s compositions include string band music, gospel music (black and white), black laborer work songs, country music, and blues. In addition to Bill’s high lonesome lead singing, his catalog also includes duet, trio, and quartet harmony selections. Bill settled on the mandolin, banjo, fiddle, guitar, and bass combination for his band after experimenting with various other instruments.

A few bluegrass fans claim that the genre began in 1939 when Monroe appeared on the Grand Ole Opry; however, most believe Earl Scruggs, who joined in December of 1945, created the classic bluegrass sound. North Carolina native Scruggs’ three-finger banjo picking style energized and excited audiences with its passion and clarity.

In profile, the Statue of Liberty appears on the obverse (heads) of the coin. As a symbol of industry and innovation, the face includes a stylized gear privy mark.

The bluegrass instrument, the banjo, appears on the reverse (tails). The musical instruments are tilted to one side, suggesting rhythm and movement.