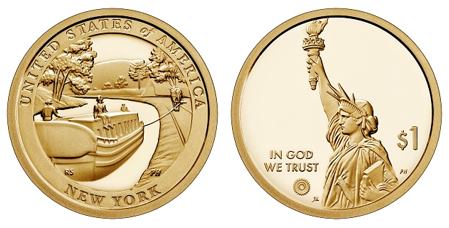 This coin was the eleventh regular series issue of the New York American Innovation Dollar. The coin commemorates the completion of the Erie Canal, which took place in 1825.

A country divided by geography was brought closer together in 1817 by constructing the Erie Canal. Buffalo, New York, was connected to the Hudson River by the canal. Bringing immediate benefits for New York, Erie Canal opened in 1825.

By connecting ports on the Great Lakes with eastern markets, the Erie Canal established the first national transportation system. America needed to build canals further inland to reach the Midwest. Ohio caught the canal fever after seeing the benefits of the Erie Canal. Plans were underway in 1825 to link Lake Erie to the Ohio River. The northern Ohio continental divide created a significant obstacle in many routes.

Geographical factors and political factors both contributed to canal route decisions. Summit County would be the highest point along the Divide, so that more water sources would be needed. Water could be obtained from the nearby Portage Lakes and the Cuyahoga River.

On the reverse is depicted a packet boat being towed from a city in the East to rural areas in the West. As well as “United States of America,” there are inscriptions that read “New York.”. Ronald D. Sanders designed the reverse, which Phebe Hemphill sculpted.