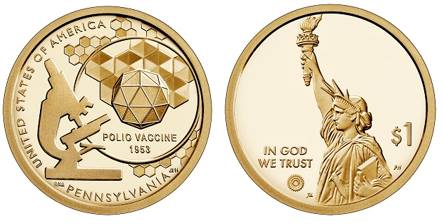 There was a second regular issue of the Pennsylvania American Innovation Dollar in 2019. Dr. Jonas Salk and his team discovered the polio vaccine, which was honored by the coin.

Doctor Jonas Salk was hired by the University of Pittsburgh in 1947 to develop a polio vaccine. This devastating disease paralyzed many children and young adults at the time. Following two years of clinical trials, the vaccine was determined to be safe and effective after its discovery in 1953. One of the most superlative achievements in the history of medicine was the general administration of the vaccine that wiped out polio.

During a national radio show broadcast in 1953, Dr. Jonas Salk announced that a vaccine had been developed against the virus that causes poliomyelitis. In 1952, when 58,000 new polio cases were reported in the United States, more than 3,000 deaths were associated with polio. Salk was celebrated as one of the greatest doctors-benefactors of his time because he committed to eventually eliminating infant paralysis, which primarily affects children.

An image of the poliovirus is depicted at three different magnification levels on the coin’s reverse design. Some inscriptions read “United States of America,” “Polio Vaccine,” “1953”, and “Pennsylvania.” A reverse design was created by Richard Masters and a sculpture by Joseph Menna.