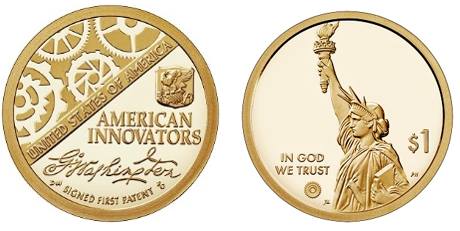 Minted in 2018, this coin was intended to introduce a series of coins honoring innovation and innovators. It was the only coin released that year. During the 15 years of this series, there will be four new designs every year.

Samuel Hopkins received the first United States patent on July 31, 1790, when President George Washington granted it. Potash is an ingredient found in fertilizer, and the patent was issued to develop a process to make it.

Samuel Hopkins (1743-1818) received the first patent of the United States from George Washington. It was 119 Arch Street where Hopkins lived. A patent was issued to Hopkins on July 31, 1790, for improvements in the production of potash, a primary industrial chemical. The US Government has given millions of patents over the centuries to protect inventors and their innovations.

They raised six children in Philadelphia, and Hopkins married Hannah Wilson, Parrish’s sister-in-law. US Census records show Hopkins worked as a potash maker. A City of Philadelphia directory listed him as a “pot-ash manufacturer” and “pot-ash maker” during that time.

Along with the signature of George Washington, the design features stylized gears to symbolize industry and innovation. Inscriptions on the plate read “United States of America,” “American innovators,” and “First Patent signed.” Designer Donna Weaver and sculptor Renata Gordon created the reverse. 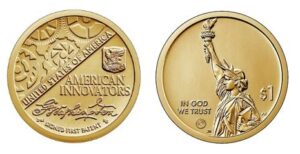